Think Again: the power of knowing what you don’t know by Adam Grant – Review 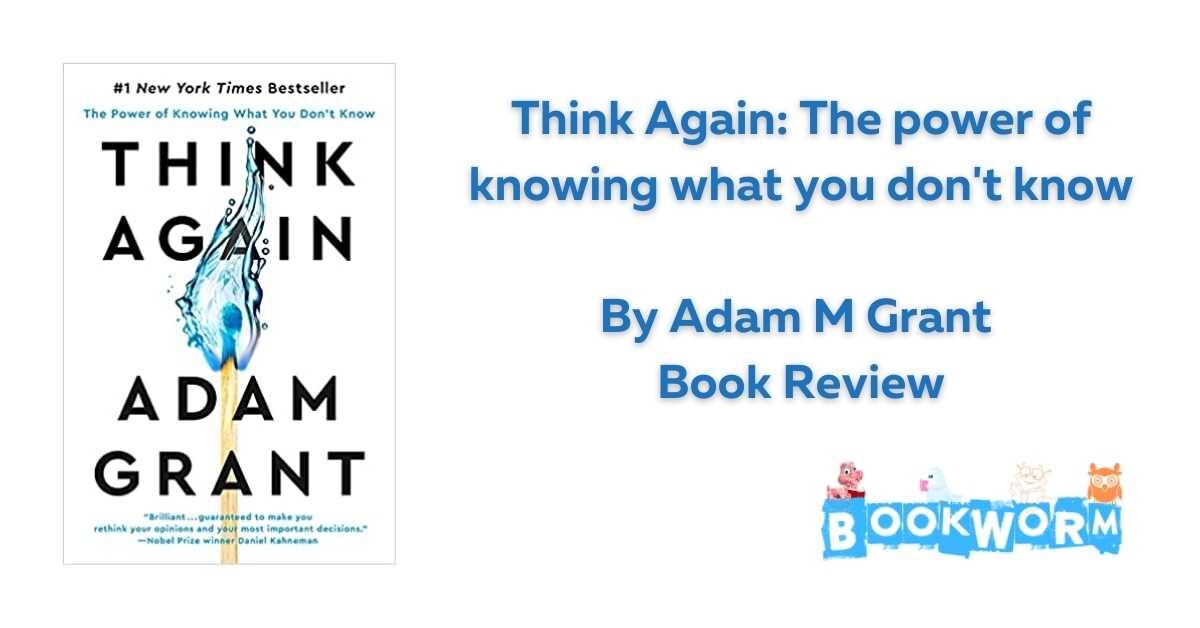 Well, many people (and rightly) believe that argument is the key to unlock many unsolved questions. When we stop arguing and start accepting everything as it is, the problem starts shaping itself in various of its form in front of us. We believe in a certain set of notions, theories and many other things where we don’t force ourselves to rethink. The rigidity of our behaviour stops us from rethinking and exploring what we don’t know. For all those who are having the same problem, Think Again: The Power of Knowing You don’t Know by Adam M Grant is claimed to be the book that can solve many problems for many readers. The author and many readers tell that it is a powerful book that describes the science behind our behaviour and what forces us to beliving in what we use to believe.

Adam Grant is a psychologist who has wonderfully highlighted those points where humans and the process of rethinking collide. We don’t accept constructive criticism even after understanding the fact that it is right. A belief system works in our body that is hard to get out. The notion of knowing everything blocks the growth potential. The author has rightly observed a person who knows everything about a subject will learn less than a person who doesn’t know anything about a particular subject. When we stop asking our doubts, questions and queries we can not explore unexplored things. That is true. However, as you might have found out (if you read his book), the author is hell-bent on making the readers believe that he is right and you should take everything he asks you to do or follow on the face value. That’s the problem with authors who write self-help books. (:

The book has been divided into three sections and section one explores why we struggle to rethink and how we can learn it, section two deals with how we can help others in this process and the last section deals with schools, businesses, government many other organizations falling short in building a culture where we can rethink. There is a classic Indian story, when you want to learn something you have to empty your mind then you can understand and argue as well.

Grant’s book argues about with loaded information on the internet we live in a dilemma that we know everything. However, in reality, we live in a superficial environment of overconfidence in knowing everything. In the age of misinformation, we should argue about the things that we see everywhere. For example, in October 2020, Grant jumped the gun too early and had his potshot on the countries led by male leaders because ‘they did not force lockdown early enough’. Well, today, I hope he is having his opportunity to rethink and sees how his own country is being mishandled by his favourite leaders whom he voted for and made others vote without ‘rethinking’ his choices.

It is the duty of the school as well to develop the process of rethinking and not accepting everything as it is. When you step into a school you are being told that these writes are great don’t question about them. This process of learning blocks the critical thinking of a student. These points are valuable and because the author is a professor of repute and does think and rethink (perhaps, at times), we should pay heed to what he has to say.

Adam Grant does argue passionately and does everything in his hand to make the readers believe in his theories and his ideas. However, he seldom brings something new in terms of philosophy or theory to the fore. He only brings data, science and facts from psychology to the readers and only the readers who are not qualified in such academic degrees will find these things wonderful. Well, this is what an author ideally does. Makes you feel vulnerable and gives you the lacking information. The author of Think Again: The Power of Knowing What You Don’t Know has done the same, rather wonderfully!

The book is filled with wonderful examples that help the readers to relate it to real-life situations. It can be concluded as try to rethink and avoid believing everything that comes to you. Well, for entertaining your mind and a little muscle-flexing, you should read this book and you might find many wonderful things coming your way in terms of facts and theories and maybe something worth implementing upon yourself.

Get this book from Amazon India – click here to buy now

Think Again: the power of knowing what you don't know by Adam Grant – Review

Think Again: the power of knowing what you don’t know by Adam Grant is a self-help book that tries to help the readers in understanding why one should rethink rather than being rigid.