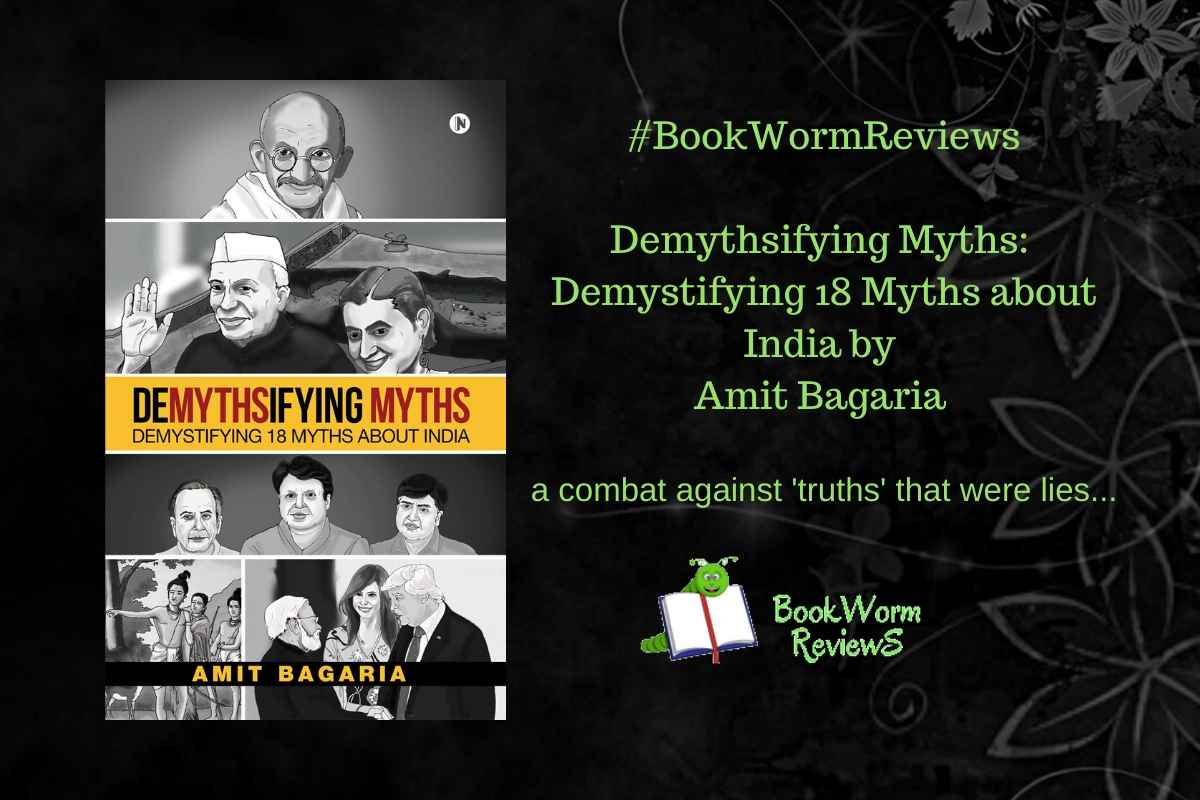 Truth is often a distant relative of lies. Mysteries and myths often couple together and try to defeat the truth but it seldom happens as, for long, it has been the tradition that truth triumphs – maybe at last, but it does. This philosophical statement might bewilder the readers of BookWorm Reviews but it has to be stated as the book I will be reviewing is directly related to this statement. Amit Bagaria’s very popular book, Demythsifying Myths: Demystifying 18 Myths about India is a book that takes on 18 specific myths that relate to India, specific Indians and all the readers. Are you ready for the revelation? Let’s settle it, then.

Demythsifying Myths: Demystifying 18 Myths about India, by Amit Baagria, is a daring piece of literature. It takes on some of the mightiest (or long ago used to be mighty) figures of India – Mahatma Gandhi, Chacha Nehru, Congress Party, some concepts that one may have believed to be true and many other ideas and notions – 18 in total. The chapters on emergency in India and also about the impediments that the Upper House in Indian parliamentary system creates will be enlightening for many who don’t have so much information about the Indian political system and recent Indian history. This book also challenges the very concept of India as a country that has been more than 5,000 years old!

Though the ‘truths’ by Amit may shatter the beliefs of many readers, these are the truths that need to be told to the people who have been believing in some illusionary make-believe fancy ‘lies’ all the while. Looking from a biased angle, the book may seem biased to the readers who come with a preoccupied political or ideological leaning to read the book. However, to judge the matter of the book and to weigh the content that is packed in it, one has to observe the book and read it with a neutral perspective. To question the very idea of calling Gandhi a Mahatma and to uncover the unsettling truths of Indira Gandhi era India and her personal relations with ‘many people’ takes an act of great courage and the author needs to be commended for that!

The chapters on President vs PM, Hindu Rashtra and Kashmir are amazingly compiled and will educate the readers about various facts that we MUST know. It is a book that educates as well as enlightens and, at the same time, uncovers the truths that need to be known by people en masse. Are you ready for all this?

Critically, the book has been written in a way that will suit the narrative the most. Amit has used simple language and a very friendly tone throughout the book except at the end when he argues his last by asking a ‘nirvana’ for himself in an amusing way – all’s well that ends well…

You will love reading this otherwise non-fiction book – a political dazzler and a myth-buster by all the means. I will recommend this for the young readers who have been brought up with many confusing ‘truths’ which they don’t question but just accept. They all need to read Amit Bagaria’s account. All the best to the readers and best wishes to the author!

You can buy your copy by clicking the link to Amazon India below:

review by a contributor to BookWorm Reviews