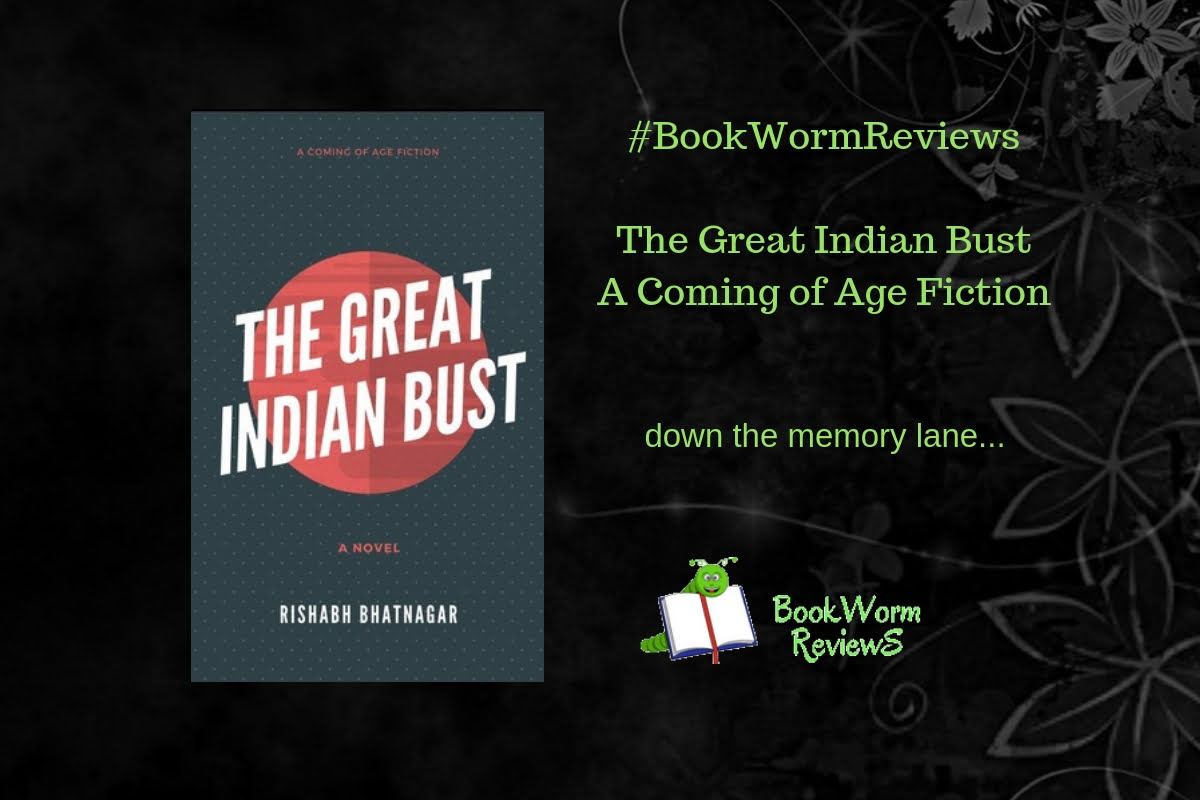 I have been told to read and review this medium length novel written by Rishabh Bhatnagar by the team at BookWorm Reviews. I began reading it this Sunday and it took me nearly two days (including the breaks and pauses). Interest level kept rising and falling according to the tone of the narrative which was almost at the same level (except for the occasions it changed). Rishabh has written this ‘coming of age fiction’ to offer something new to the readers. To a great length, he has even succeeded in offering something new. The Great Indian Bust employs the first-person narrative with a semi-bildungsroman technique. The author has put himself (with a changed name that rarely appears in the novel) in the fiction and has tried to tell the readers the story of his life – right from the times of his grandfather to the present.

The Story:
Is there a story in the novel? Oh, yes. There is one. The story largely concentrates on the growth, development and actions of the protagonist who is at the centre and everything and everyone else revolve around him only. Rishabh Bhatnagar has used humour in the narrative more than often to outwit the readers and at times, the author puts the foot wrong and readers are rather amused than being outwitted! The story in the novel goes to Chandigarh, Delhi and Lucknow (mainly). There are protagonist’s friends, parents and one certain girl whom the protagonist loves. To conclude this part, the story is simple and straight. However, to go down and to dig deep, the readers will have to read between the lines.

Theme and Subjects:
There is no certain theme in the novel if you read it carefully. However, there are random subjects that are dealt with by the author consciously or unconsciously. The one certain theme that occurs and reoccurs constantly throughout the novel is reality vs expectations in life or a teenager (and eventually a young man). How a person growing in a certain society understands the world around him and how he reacts to certain things are also very well expressed in the novel. A kind of restlessness that is shown by the central protagonist and his friends is also a remarkable realism drawn by Rishabh in The Great Indian Bust.

High Points vs Low Points:
Rishabh has been partly successful in offering ‘new’ to the readers. He has been good at the narrative and using the colloquial language. Abuses are also there in the narrative to support the mood and set-up of the characters. This is good. However, a lack of a central theme makes the readers feel perplexed at time. A kind of randomness sweeps the length. Is that deliberate? Well, you can judge that yourself!

Should you read it?
Who does not want to read an account of a teenager’s life? Yes, there will be school life, there will be love, there will be friendship… I will suggest youths should read this novel. They will find it according to their choice. The readers who are above 30 will have things to remember and an opportunity to slip back in time!

Get a copy for yourself from Amazon Kindle today!

Buy the novel – click here to buy from Amazon

The Great Indian Bust: A Coming of Age Fiction

We have rated it three based on our reading. It is a suitable work meant to be read by youths and teens. They will find many things to relate to in this work by Rishabh.